In October of 2004, on one of the Krempetz's trips to a contest in Muncie, Indiana, grandson Kenny asked me if I would like to tow up his Mini-Master towline glider. One of the first planes that I had success with in my childhood was a towline glider. Since I hadn't towed a glider up in the last sixty years, I couldn't pass up the offer. The thrill of the pull on the line as the plane bites the air, and watching the slow glide after the plane comes off the hook was one I had forgotten. I had wondered if a seventy-three-year-old could move fast enough to accomplish the task of towing. I did manage! Maybe not the highest, but I got it done.

The following winter when Stan Boddenbohm told me about his latest new design for 2005, the Sidekick an NFFS classic towline glider, I decided to build one. 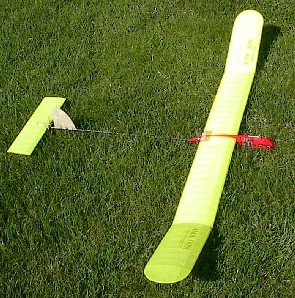 The glider assembly was easy. Adjustments for trimming are very clever. The construction process is simple. It is light but strong. I decided to cover the glider with Mylar. I purchased it from Model Research Laboratories (http://www.modelresearchlabs.com). I used my computer to print on the underside of the Mylar- AMA number, name, etc. I then painted the underside with fluorescent paint so it will show up in the air when the glider is in flight. I am satisfied with the results, it looks and flies great. The glider is designed for a popup stab for DT. The DT line runs through the fuselage tube to the pod where it is tripped by the dethermalizer.

In the area I live in, there are no flying sites large enough to fly any freeflight without a dethermalizer that can be set for a short DT time. This is the main reason I decided to try one of EF Technologies (http://www.eft-inc.com/models) dethermalizer, called a Smoothie. The Smoothie can be set easily to any desired DT time - to the second. The following three views of the pod of the Sidekick show the installation.

The top view shows the hot wire release. This cuts the rubber band loose which activates the DT. Under the hot wire circuit board is a lost model buzzer whose time is also programmable up to nine hundred ninety-nine seconds in one second increments. You can see the line that runs to the popup stab (on the other end of the rubber band).

The right side view, you can see, I mounted the Smoothie on a separate board which has a three-pin Dean's plug built into it. This allows the battery pack to be removed to be recharged. In this view, the battery pack is removed. The pack has two Li Polly cells wired in series. They supply 8.4 volts with 145 milliamps hours of current. The weight of a hundred and forty five milliamp hour Li Poly is 3.5 grams-per-cell. The Smoothie would operate on one of these batteries, but since I needed more weight on the nose to get the center of gravity in the proper place, I decided that two batteries in series would be better, then adding 3.5 grams of lead. There also is a Dean's plug between the two batteries. I use it as a switch. (The string is attached so I don't lose the jumper plug).

The left side view shows the auxiliary activation switch (another feature incorporated into the Smoothie's design) to start the DT timer as the plane comes off the line. In the picture, the switch is pinned with the release line. I am happy with the operation of the Smoothie. It does a great job! Visit their website. They make many types for all types of freeflight models. They even make one to operate an electric outrunner brushless motor that deliver unbelievable torque for their size and weight. This will change electric freeflight.